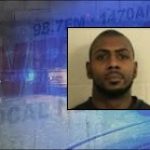 A man arrested earlier this week on a misdemeanor obstruction charge as the GBI was investigating a double homicide is facing additional charges.

Brown was initially arrested Monday as search warrants were executed on apartments and vehicles based on leads that were developed and tips received from the GBI Tip Line regarding the murders of Vanita Richardson and Truvenia Campbell, whose bodies were found May 13 underneath the Etowah River Bridge on the bypass.

36-year old Devin Lashawn Watts was also arrested at the apartments on Dodd Boulevard on charges of theft by receiving stolen property and possession of a firearm by a convicted felon.

Neither man has been charged in the murders.