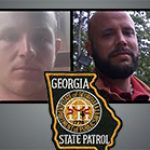 (Via WBHF) On Friday, May 22, at approximately 4:15 a.m., a motorcycle driven by 28-year-old Shawn Hendon was traveling north on Glade Rd.

An ATV driven by 37-year-old Larry Murray was traveling south on Glade.

According to Georgia State Patrol reports, Hendon and Murray both failed to maintain their lanes and entered into the center of Glade Road.

The motorcycle struck the front of the ATV. Following impact the motorcycle continued to travel north coming to final uncontrolled rest on its right side in the right lane.

Both drivers were not wearing the proper protective equipment at the time of the crash nor did both vehicles have proper working headlights or tail lights.

The area of impact was determined by roadway debris and the final rest of both vehicles.

Both drivers, Hendon of Acworth and Murray of Cartersville were fatally injured.