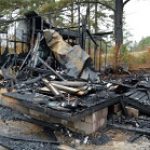 Around 8:15 A.M on the morning of November 29, the Gordon County Fire Department responded to a residential fire located on the corner of Oakman Road and Hanes Road.

After arriving on the scene, emergency personnel discovered the body of Charles Vice, 69, of Oakman, Georgia, nearby the structure.

“The home was completely destroyed by the blaze. The body of the deceased was turned over to the local Coroner’s Office for transport to the GBI Crime Lab, where an autopsy is set to be performed,” said Safety Fire Commissioner John F. King. “The cause and origin of this tragic event are still being investigated.”

In 2019, Georgia fires have claimed the lives of 85 individuals.